EXECUTIVE SUMMARY
Tirana, 24 June 2013 - The Coalition for Free and Fair Elections (CFFE) is pleased to report that the voting process in the Tirana election district proceeded peacefully and was free from any incidents that could significantly impact the voting process. The report incorporates the data regarding the setting-up, opening, and closing of the polls, as well as the overall voting process on the Election Day. CFFE's main findings, which are based on a statistical sample of 350 voting centers for a 95% confidence interval with a margin of error of 4.8% for the Tirana election district, include:

CFFE would like to thank all of its observers for their spirit of volunteerism and commitment to observe the 2013 Parliamentary Elections. It is this spirit of volunteerism which enables citizens observation groups to provide the public with independent, non-partisan information on the conduct of the election. Ultimately, the further advancement of democracy in Albania will be determined by citizens remaining actively engaged in political processes.

METHODOLOGY
In the district of Tirana, CFFE deployed 350 nonpartisan observers to a random, representative sample of voting centers, such that observations at those voting centers could be extrapolated to present an overall picture of election-day activity throughout the district. Tirana was selected as the biggest district in the country and also as a district which had a history of contested results.
CFFE's sample was stratified by the 18 Election Administration Zones (EAZs) in the Tirana election district as shown in the deployment map below. Within each of the 18 EAZs, the voting centers were chosen at random. This sampling technique ensured that the sample was both representative and random, allowing CFFE to make an accurate and systematic assessment of the voting process in the district of Tirana. Based on the data received, CFFE's conclusions about the Tirana election district for a 95% confidence interval with a margin of error of 4.8% for the qualitative analysis of the electoral process. The margin of error for CFFE's data on quantitative aspects of the voting process, such as voter turnout, is 0.81%. 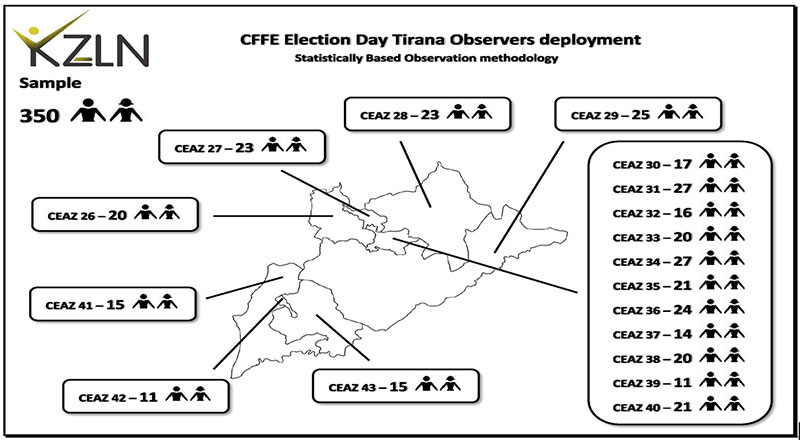 All of CFFE's observers went through a full day of training, where they received instruction on their rights and responsibilities as citizen observers and training on how to use the CFFE's specialized reporting and communications systems.
CFFE observers observed the entire voting process, including opening and closing procedures. All information from observers was entered into a specially designed database that allowed CFFE to quickly analyze the data received from their observers and distinguish between what are isolated incidents and what might indicate a larger trend.
CFFE collected and analyzed reports, relating to VCC compliance with voting procedures and administrative protocols, as well as qualitative assessments regarding voter access and voting rights, to create an unprecedented picture of the voting process in the Tirana election district.
CFFE has also deployed observers to all 18 Ballot Counting Centers (BCC) in Tirana. CFFE observers will be present throughout the counting process, allowing CFFE to provide the public with a full assessment of the counting process in Tirana. CFFE has evaluated this information per international standards of democratic election conduct.

II. Family Voting
There were repeated instances of family voting, where voters vote for family members who are not present or assist family members at the voting center who do not need assistance. CFFE received reports that family voting was permitted in at least 25 voting centers, but it did not involve large numbers of voters. Family voting was more pronounced in rural areas administered by Commissions of Electoral Administrative Zones 43, 29, and 30. This is a clear violation of voting procedures.

III. Voters with Disabilities
All voters have the right to vote freely, directly, and in secret. Although the Central Election Commission (CEC) attempted to take measures to guarantee these rights for voters with disabilities CFFE notes that poor planning left the CEC with little time to fully implement the intended activities.
Findings show that 49.5% of voting centers were not fully adapted to allow free access of persons with disabilities to the voting center. Meanwhile, it was reported that more than half of voting centers (67.3%) were not equipped to accommodate persons with physical disabilities, such as adjustable voting booths.
The CEC announced plans to develop and distribute braille ballots but was unable to produce them in time. As a result, none of the voting centers in the district of Tirana was equipped with means to allow blind voters to vote directly and in secret.
The number of persons with disabilities that exercised their right to vote at the centers observed was 1,187. Only half of them (587) were able to vote directly and in secret but the remaining voters had to be assisted to vote. The Coalition observers identified 20 cases where voters with disabilities were improperly assisted in breach of the Electoral Code and international standards.
The CFFE notes a number of factors that discourage people with disabilities from voting. These include: a)a lack of alternatives to enable voting for disabled voters who cannot move from their homes; b)a lack of accessible voting centers and lack of adjustable transport means; c) an inhibiting legal framework guaranteeing the right to vote of voters with mental disability; d)and a lack of support services. These factors should be addressed in future elections.

V. Violence and Intimidation
Voters were largely able to cast their ballots in an atmosphere free from intimidation and violence in voting centers. CFFE received 10 incident reports from its observers of physical altercations between party militants often resulting in a short suspension of the voting process. However, these incidents did not have a significant impact on the overall voting process at the voting centers where they occurred.

VI. Voter Turnout
Based on CFFE's data, the voter turnout in the election district of Tirana was 58.3% for a 95% confidence level and a 81% margin of error. This is higher the participation of the 2009 Parliamentary elections which was 50.77%.

CFFE project on election observation is being assisted by the National Democratic Institute (NDI) through funding provided by the United States Agency for International Development (USAID), the Austrian Development Agency, Civil Rights Defenders, the Open Society Foundation Albania, and most importantly, by the hundreds of Albanian citizens who volunteer their time to CFFE's efforts for the Parliamentary Elections of June 23rd, 2013.

CFFE's observation findings can be found on its website at www.klzn.org.